My first video: creating a Hello World class in Squeak 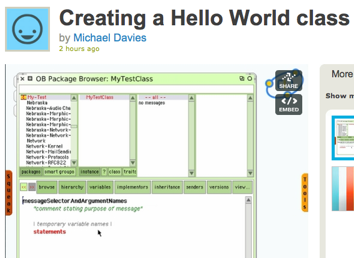 Given the recent push to get Squeak video tutorials available, I decided to have a go myself. I took as my starting point my post from a few months back, intended to act as a quick introduction to developers coming to Squeak for the first time.
My first problem was to find a good screen capture utility. Unfortunately, Wink isn't available for OS X, but a bit of searching uncovered Snapz Pro X. Despite the terrible name, it's a very nice piece of software that makes recording video and screenshots very easy. It comes with a 14-day fully-functional trial, so if I get a taste for this, I may end up having to cough up the $69 soon. If anyone knows of other software I could use, please let me know.
You can view the video at vimeo.com, or find it in the new Squeak Smalltalk group that Randal Schwartz has set up. Have a look at the video and let me know what you think: too fast, too slow, too much like Ricky Gervais, whatever.
Posted by Michael Davies at 19:29 3 comments: 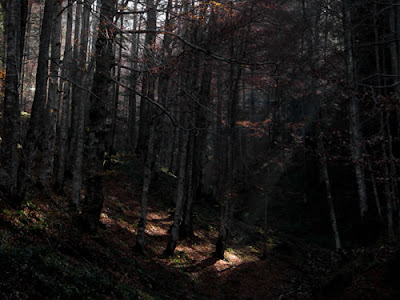 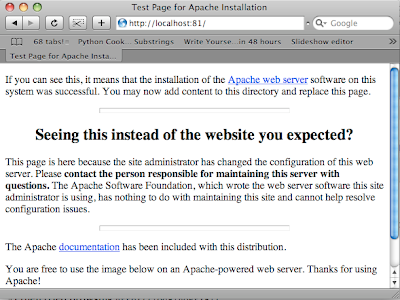 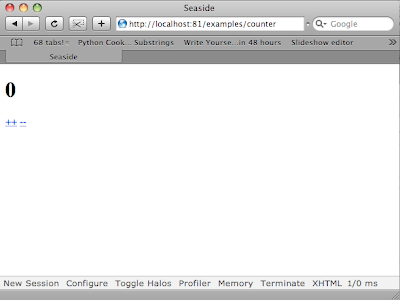 Digging into the functionality behind morphs

Someone on the Seaside mailing list asked how to find out the meanings of all the icons against each method in the browser. The answer is quite interesting, as it helps you understand the importance of the "live environment" that Squeaks gives you.

Looking at a typical class, you'll see that many method definitions have a little icon by the name: 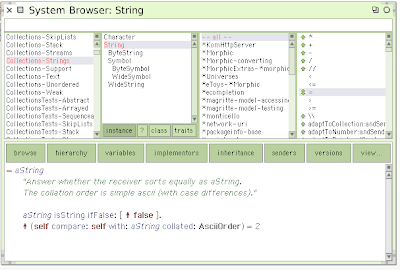 (nb alt- and cmd- prefixes used below may need to be changed depending on your image preferences).

In order to work out why things happen in morphs, you can easily access the underlying code. In this case, alt-click on the offending item repeatedly to bring up halo menus for more targeted morphs. The closest in you get is OBLazyList - if you go too far, you'll notice that you cycle round to the original morph again. Notice in this case that this morph is much bigger than its containing morph, and so much of its content is hidden from the user:

When you're on the morph you're after, you can then find out more about it by clicking on the "spanner" (=debug) icon, and selecting "browse morph class", which will open a browser on OBLazyListMorph. 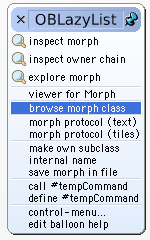 Look in the "drawing" methods of this class, and you'll get your first clue in #display:atRow:on: which selects and draws the icons with the help of OBMorphicIcons class. 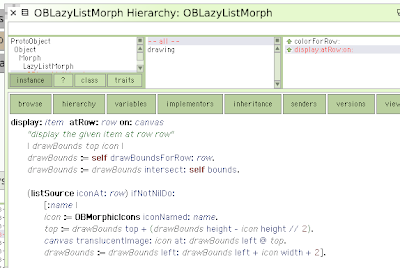 Selecting the name OBMorphicIcons and pressing Cmd-B will bring up a browser on that class, and you'll see that each icon is defined by an instance method. Click on one of these (I chose #arrowUpAndDown because that looks pretty likely to be unique to this usage), and press Cmd-n to find its senders.

Bingo! OBInheritanceFilter method #icon:forNode: decides which icon to display based on a number of tests, including a test for #halt: messages that puts a red flag against a method. 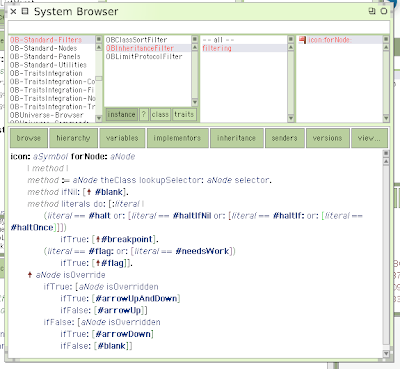 You'll also see that this code accidentally red-flags itself because it fails to distinguish between #halt: used as a symbol rather than as a message.
Posted by Michael Davies at 19:27 No comments: